From Dragons and Swords to Motor Cars and Gaffers

this week in between re-reading The Volsunga Saga and Tolkien's The Legend of Sigurd und Gudrun for the current Tolkien and Epic Class offered through Mythgard Institute (spring enrollment now open!) -I read something new by Tolkien. Well new for me as I have never read this work before. This work is Tolkien's children's story picture book Mr. Bliss first published in the U.K. in 1983.
This charming story told by Tolkien through word and pictures tell the tale of Mr. Bliss who wears large hats and has as his neighbor a girabbit - a creature like a rabbit with a giraffe's long neck. One day Mr. Bliss decides to trade his bicycle in for a yellow car and he and his companions - including three bears - go on all kinds of misadventures.
According to Humphrey Carpenter, Tolkien's motivation for the story may have come from his own purchase of a motor car in 1932 and his own mishaps with driving (we know how Tolkien felt about mechanical things). In 1936, Tolkien submitted Mr. Bliss as one of the potential s

tories that would follow the success of The Hobbit. While Tolkien's publishers Allen and Unwin thought it was in class with Alice and Wonderland it was decided the rich illustrations would be too expensive to reproduce and the work was rejected (and of course it was through this and several other works being rejected that Tolkien eventually started work on his "new Hobbit" which became The Lord of the Rings).
But what interested me most about this whacky story (and it is that!) was the cameo appearance of a rather familiar character. In Mr. Bliss Tolkien describes Bliss and all his companions driving to the village and standing about in the centre of town he describes:

"Mrs Golightly is standing with a parcel in her arms, and has stopped talking to Mrs Simkins; old Gaffer Gamgee is trying hard to hear....."
Well what do you know the Old Gaffer has shown in up in Mr. Bliss! He of course will appear later as Sam's father in The Lord of the Rings.

Where did he come from? According to a letter Tolkien wrote to his colleague Christopher Bretherton in 1964 ((Letters, p. 347-8) in the 1930's Tolkien used to take the family to Cornwall (Lamorna Cove) and in 1932 the met "a curious old fellow who used to go around swapping gossip and weather wisdom and such like. To amuse my boys I named him Gaffer Gamgee and the name became part of family lore to fix on old chaps of this kind."

Why would Tolkien have used the word Gaffer to describe this old fellow. The word "gaffer" is sometimes used colloquially to refer to an old man, an elderly or rustic. The Online Etymology dictionary suggests is may be a shortening of 'godfather' with "ga" from association with 'grandfather'
The etymological cite is

1580s, "elderly rustic," apparently a contraction of godfather (cf. gammer); originally "old man," it was applied from 1841 to foremen and supervisors, which sense carried over 20c. to "electrician in charge of lighting on a film set." 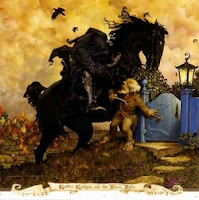 n (he is seventy-five at the start of The Lord of the Rings and is the chief gardener (or foreman) of the gardens at Bag End.

"After all" as Old Gaffer Gamgee of Bagshot Row remarked "these goings on are old affairs and over; this here party is going to happen this very month as is" (Return of the Shadow, p. 30)

So the term "Gaffer" was in existence as a term used by the Tolkien family to describe old men before Tolkien developed this character and when he needed a term for an old foreman what better name to use then the one from Cornwall and the one who made an appearence in the earlier Mr. Bliss (who appears to be hard of hearing!)
Unlike some of Tolkien's other pre Lord of the Ring stories (including Roverandom and of course The Hobbit) there is very little evidence of other elements of his secondary world work peeping through the pages of Mr. Bliss - there is an adventure in Three Bears Wood that reminds one slightly of The Old Forest and there is a character called Fat Dorkins (or just Fattie) who has curly hair and wore no coat because he split the coats when he tried to get into them. Makes me think of Fredegar Bolger one of the Hobbits who set up the house in Crickhollow and stayed behind and in the earlier versions of LOTR played a much larger part in the story (and of course became a hero in his own right when he made the Nazgul flee by ringing the Horn of Buckland. Tolkien's Mr. Bliss is a wonderful zany adventure and just shows how Tolkien could evoke his story telling craft, as well as his talent at drawing and painting, to construct a fun exciting story for his children and for us all. A nice diversion from incest, dragons, magic helms and sleeping Valkyries - which I am now turning back to..... although I can hear the Old Gaffer saying no thankee to dragons!!!
Posted by Dr. Andrew Higgins at 11:43

Nice post, Andrew. If you're looking for LotR-ish connections between MR. BLISS and the Shire, don't forget Sgt. Boffin.

By the way, there's some debate about when Tolkien wrote this story. I agree with you that it was in 1932, but the claim has also been made (by Michael Tolkien's wife) that it was somewhat earlier, circa 1928. For more on how 'Gaffer Gamgee' entered Tolkien family lore, see the amusing account in THE TOLKIEN FAMILY ALBUM.

Pity there's so little written on BLISS. I don't think there even ever been an audiobook version (unlike, say, GILES and ROVERANDOM and FR. XMAS LETTERS and NIGGLE, &c.). But posts like this one are a start.