Across the Bridge of Tavrobel 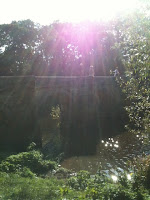 Yesterday, taking advantage of both a free Saturday and a very warm day in England, David and I took a train up north to Staffordshire to Shugborough Hall which has been said to have been the inspiration for J.R.R. Tolkien's Book of Lost Tales Elf city of Tavrobel and Gilfannon's House of the One Hundred Chimneys.

This recent "Tolkien Trail" document is a good example of this reputation.

I started this journey rather bleary eyed as I had been up late the night before attending the excellent web moot of The Mythgard Institute's Tolkien and Epic course with Dr Verlyn Flieger doing the closing session on Kalevala and Kullervo (by the way enrollment is now open for Spring Courses). But I set out to see for myself this area and see if this truly was the inspiration for Tolkien's setting for his Book of Lost Tales.

Thanks to the great scholarship of John Garth in Tolkien and the Great
War: The Thr

eshold of Middle Earth (available in print, e-book and a very highly recommended audio book read by the author himself) we know that J.R.R Tolkien enlisted in the army and in 1916, was stationed at Cannock Chase in south Staffordshire. His wife, Edith, whom he married in March of that year took a cottage at the village of Great Haywood, near Stafford, just to be close to him (more on that Cottage later). After returning from the animal horror of The Battle of the Somme with trench fever in November 1916, Tolkien, spent that winter convalescing with Edith in the cottage at Great Haywood.

Of this time, John Garth says "in his absence Edith had traced his movements on the map on her wall. Until now, any knock at the door could have brought a dreaded War Office telegram. His return to Great Haywood was thus an emotionally charged moment, which Tolkien marked with a six stanza ballad, The Grey Bridge of Tavrobel - Garth gives us this elegiac poem of return -

O! Tell me, little damoiselle
why smile you in the gloaming
On the Old Gray Bridge of Tavrobel
As the Gray folk come a-homing

I smile because you come to me
O'er the gray bridge in the gloaming
I have waited, waited wearily
To see you come a-homing

In Tavrobel things go but ill,
And my little garden withers
In Tavrobel beneath the hill
While you're beyond the rivers

Ay long and long I have been away
O'er see and land and river
Dreaming always of the day
Of my returning hither" (Garth, p.207-208)
Where does Tavrobel and this Grey Bridge come from and how is it connected to this area Tolkien was staying in with Edith?

One of the most revealing documents that gives evidence for TAVROBEL is a Heraldic Device that Tolkien sketched as part of his collection of Heraldic Devices of Tol Erethrin which appear in The Lost Tales Notebooks and was published with notes in Early Noldorin Fragments in Parma Eldalamberon 13. According the editors notes -

"The first inscription is labelled Taurobel which Christopher Tolkien identifies as Great Haywood in Staffordshire where Tolkien and Edith lived in 1916-1917." In the lexicon of the Goldogrin language developed during the time of The Book of Lost Tales - the name comes from TAVROS "forest, wooded land" (as in the name of the upcoming (Eru help us) new Elf in the Peter Jackson film The Hobbit Tauriel) and the second element is a mutated form of PEL which means village, home or or hamlet (from the verb PELU from which we later get the battle field of PELANNOR) -so TAUROBEL (or Tavorobel) could mean "wood home"

The description of this heraldic device is as follows: "The device depicts three trees, tall and narrow like Lombardy poplars, above a bridge with three arches through which flow three streams of water with clusters of reeds growing on the banks. Above the trees is the arching motto TRAM and NYBOL apparently the name of the bridge." (Parma 13, p.94)

In the Gnomish lexicon found in Parma Eldalamberon 11 TRAM is confirmed as BRIDGE (TRATH is glossed as a passage or a ford) The second word NYBOL may be related to the Goldogrin word NIB which means SNOWFLAKE (Gnomish Lexicon, p. 61) and NYBOL might mean SNOWY BRIDGE. After trying to find some linguistic reason why a bridge would be refered to with the word snow, my partner David pointed out the obvious to me - and that is if Tolkien were in this area in the winter of 1916 there would have been snow on the bridge. Also could winter not be depicted as "gray" as in the poem above.

In The Book of Lost Tales which Tolkien started around the time of his convalesence and thus would have been working on during his time in Great Haywood, there are several descriptions of a bridge associated with Tavrobel. In the interlude to The Tale of the Sun and the Moon, Eriol the wanderer is told to go "to the ancient house - the house of One Hundred Chimneys that stands nigh the bridge of Tavrobel (Lost Tales 1. p.175). In the last tale, the final battle of Men on the Withered Heath takes place a "league from Tavrobel."In the epilogue to The Golden Book which Eriol (or Eriol's descendants) wrote depicting the Great Tales he has heard from the Elves, there is a recollection of "the people of Tavrobel beneath the Moon, and they would ride or dance across the valley of the two rivers where the grey bridge leaps the joining waters." (Lost Tales 2, p.287-88 -my emphasis added) 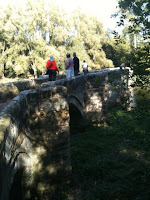 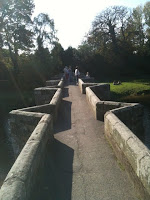 izabeth I which crosses the Trent at Great Haywood and connects the village with the Shughborough Estate and has a second tributary of the River Trent - the River Sow flowing under it - and as you can see it is very wooded (need to check on the poplars).

According to Christopher Tolkien, in the epilogue to the final days of The Book of Lost Tales, Tolkien names these two rivers as GRUIR and AFROS (Lost Tales 2, p. 287). So can we see any source to where Tolkien might have constructed these names from? According to Wikipedia, the name "Trent" comes from a Celtic word possibly meaning "strongly flooding". The tributary Sow is said to have been originally Stow which means "place" and could have been from where Stafford got it's name - "Stafford means 'ford' by a 'staithe' (landing place). The original settlement was on dry sand and gravel peninsula that provided a strategic crossing point in the marshy valley of the River Sow, a tributary of the River Trent." In a very short time of searching, one possible etymological lead I have come up with is that GRUI in the Gnomish Lexicon is defined as FEROCITY OR HORROR, MAD WITH WRATH. If a river is "strongly flooding" perhaps it could be seen as being ferocious or mad with wrath (Ulmo or Osse on the war path perhaps)? AFROS even tricker - though in Sindarin ROSS can mean foam (PE: 17:117) and AF or AB can mean "without" so a river without foam - perhaps. More linguistic work to be done here - and any helps or suggestions much appreciated! 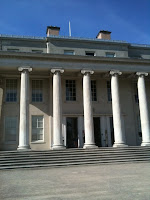 Hundred Chimneys where the wanderer Eriol is told to seek "guest kindliness of Gilfannon in whose ancient house - The House of the Hundred Chimneys, which stands nigh the Bridge of Tavrobel."(Lost Tales 1, p.175). According to the materials The Shugborough Estate (which previously belonged to the Lords of Litchfield and has many mysteries - including the mysterious Holy Grail related Shugborough Inscription attached to it) has eighty chimney's on it and therefore was the inspiration for Tolkien's House of Hundred Chimney's (in this picture you can see two of them)

While an absolutely incredible house I was less convinced by this - from what I could see (and perhaps there were many changes made to the house since Tolkien's time there) I could not see that many Chimney's!


I feel more convinced by Wayne G Hammond and Christine Scull's picture in J.R.R. Tolkien Art and Illustrator of the cottage Tolkien stayed in with Edith at Teddesley Hay in Staffordshire called Cottage 1 Gipsy Green being the real source for i 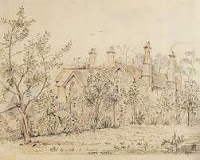 nspiration for Gilfannon's house (certainly in the sketch by Tolkien the chimney's are more prominent!)

So it was a brilliant day in Staffordshire - and yes, I think I did stand upon the very bridge that inspired Tolkien's Bridge of Tavrobel and viewed a lanscape that was very much in Tolkien's thoughts as he constructed those very first stories of The Book of Lost Tales. As I wandered through this country side I was reminded of an elegiac passage towards the end of The Book of Lost Tales -

"Hark! Oh my brothers, they shall say, the little trumpets blow; we hear a sound of instruments unimagined small. Like strands of wind, like mystic half-transparencies, Gilfannon Lord of Tavrobel rides out tonight amid his folk and hunts the elfin deer, beneath the paling sky. A music of forgotten feet, a gleam of leaves, a sudden bending of the grass, and wistful voices murmuring on the bridge and they are gone. But behold, Tavrobel shall not know its name, and all the land be changed, and even these written words of mine belike will all be lost; and so I lay down the pen and of of the faeries cease to tell." (Lost Tales 2, p. 289)

In several moments of great stillness while standing on that bridge, I think you can hear the murmurings of those forgotten feet!

Qenyaqetsa: The Qenya Phonology and Lexicon: together with The Poetic and Mythologic Words of Eldarissa in Parma Eldalamberon 12 (1998) (edited by Christopher Gilson, Carl F. Hostetter, Patrick Wynne and Arden R. Smith)