First Impressions of The Hobbit and Azog Musings! 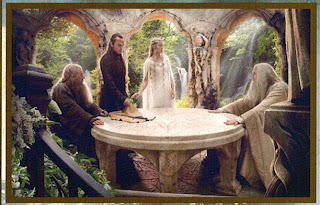 The Hobbit: An Unexpected Journey
Overall : 8.5 out of 10

I really liked the "Tolkien fan/academic" touches they put in like Gandalf not remembering the name of the two blue wizards and a fleeting mention of Ungoliant (I squealed with delight at that mention - my partner hit me!). The speech Gandalf makes about why he choose Bilbo to Galadriel was very moving and Sir Ian Mckellen beautifully delivered the words that came right from Tolkien -

Here we meet, among other things, the first example of the motive (to become dominant in Hobbits) that the great policies of world history, the wheels of the world', are often turned not by the Lords and Governors, even gods, but by the seemingly unknown and weak - owing to the secret life in creation, and the part unknowable to all wisdom but One, that resides in the intrusions of the Children of God into the Drama  (Letters , p. 149)

I found it interesting that the finding of the Ring by Bilbo seemed to be inspired by the Rankin-Bass The Hobbit TV movie .  In the book, Bilbo finds the Ring in the dark and there is more of a sense of fate working,  In now both the Rankin-Bass and Jackson Hobbit films Bilbo finds the ring by the gleam of the sword Sting.  Also interesting that in both movies - the time riddle is echoed by a unseen voice - in Rankin Bass this is not known in Jackson it is Gollum but not seen.

Thought Martin Freeman captured the essence of Bilbo and the Baggins/Took conflict.  I feel PJ always needs a hero and Thorin Oakenshield is it for these films - there were times I felt I was seeing the Aragorn story arc told again but to be fair some of that is in the text. The dwarves were fine - although some of them (and the know who they are) are just too good looking (makes Gimli look rather bad in LOTR what happened to him).   The dwarf comedy is also a bit blunted by knowing what will happen to several of them in The Hobbit and LOTR,

I have yet to find the textual authority for the whole Witch King of Angmar and Morgul blade reference.  In Appendix A after his defeat and pursuit by Glorfindel the Witch-King is said to have 'passed into the shadows.  For night came down on the battlefield and he was lost, and none saw whither he went.' (LOTR, p.1069).

The White Council scene was good and liked the use of  Osanwe-kenta (telepathy* between Galadriel and Gandalf - Galadriel walked around with a sense that she knew or suspected more than she was saying,  Is it really 400 years of peace at this point.  Need to check chronologies on this the year that this event would have taken place is 2941 of The Third Age (so wonder when Elrond is reckoning the peace would have started).

* noted Tolkien academic and linguist Carl Hostetter has very helpfully advised me that 'the title "Ósanwe-kenta" means "Enquiry [into] (_kenta_) [the] Communication of Thought (_ósanwe_)". So "communication of thought, telepathy" is just _ósanwe_. so the actual act that may be going on btw Galadriel and Gandalf would be called ósanwe- thank you Carl for catching this)


For me, having spent the last year steeped in Tolkien's early languages (and do so for the next three I imagine) the most fun was hearing Orkish being extensively used.

Given his rather prominent (and recurring) role in the movie I also thought about the etymology of the name AZOG in The Hobbit.  According to John Rateliff's History of The Hobbit the name might have its origin in Tolkien's Mago/Magol constructed language which is said to have been inspired by Hungarian (and is yet to be published) (Rateliff, 2007, p.787).


Rateliff also makes the point that there may be a relation between the -AZ- and the word NAZG (Finger Ring) in the Black Speech. I also wonder if there is a relationship between the AZ and the AS in the Black Speech word GHASH meaing 'fire.' Certainly nothing so far in the name to have inspired the color of Azog in the movie but I will continue to search the published language documents.


Will want to get a transcript of this and analyze.  The Elvish all seemed to make sense from what was being said.  I was trying to figure what was on Elrond's desk in Rivendell,

Typically Jackson scenes (long panning shots, mufti-player battles and falling rocks - man, he loves falling rocks). Did anyone else think of the 'Rock em sock em robots' when the stone giants came on?

Will see many more times for more analysis - overall I really enjoyed.
Posted by Dr. Andrew Higgins at 11:02

I just got home from watching The Hobbit, and found your post as part of an effort to figure out how the film's linguistic team constructed the language that Azog and his team were using. I was under the impression that orcs, especially in the Misty Mountains and west, used a sort of mashed-up language consisting of whatever Westron/Black Tongue they picked up; in the film the dialogue was too fast for me to pick out individual words very well but it sounded like some of the vocabulary might be vaguely Dwarvish. Do you have any insight on this? It's going to drive me crazy until I know.

Thanks! (and I'm really happy to have found your blog!)