Well its has been over a month since I returned from the fantastic International Congress on Medieval Studies at Kalamazoo Michigan (May 14-17), which was my second year of attendance.   I returned from Kalamazoo and went right into the final stages of finishing the manuscript of a new edition of Tolkien's A Secret Vice which I have co-edited with Dr. Dimitra Fimi and will be published by HarperCollins in Feb 2016 as well as the start of the 2015 Glyndebourne Festival (a.k.a my day job!).

This year's conference was really brilliant - the seminars, the papers, the colleagues I got to talk to and the fun of being part of a dramatic reading of the prose version of Tolkien's 2014 Beowulf in a brilliant adaptation by Thom Foy.

It was also quite exciting to give my second paper at Kalamazoo (now as Dr. Andrew Higgins!) - which this year occurred on the last day of the conference.  Here is a brief outline of the Tolkien related seminars/roundtables that I attended and papers given.

The first session kicked off the exploration of Tolkien brilliantly with 'Tolkien as Translator and Translated'. 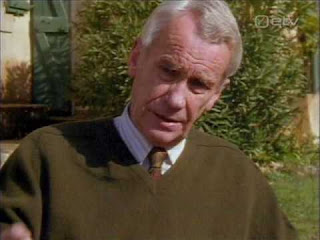 The showpiece of the first day of the conference was definitely the round-table 'Christopher Tolkien as Medieval Scholar'.  The dream-team partipants of this round-table were Douglas A. Anderson, John D. Rateliff and Brad Eden, who each spoke on aspects of the body of academic scholarship that Christopher Tolkien has done in his own right. 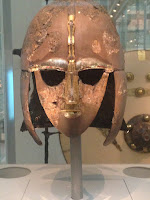 The final session of the first day of the conference was a session on  'Tolkien and Victorian Medievalism' with three excellent papers exploring different aspects of this topic.

On the next day of the conference The Tales After Tolkien Society held a round-table 'From Frodo to Fidelma:Medievalism in Popular Genres'.

Kris Swank of Pima Community College and a Signum/Mythgard Institute Tolkien scholar and colleague gave a brilliant talk on 'Black in Sherwood: Race and Ethnicity in Robin Hood Media' in which she explored how the saracens of the Robin Hood legend are depicted in modern versions of the story.  Kris made the point that in modern adaptions the saracen 'other' is portrayed either as the strange foreigner or as the integrated muslim who is part of the band of merrymen but is still marked as 'other' through their dress and the following of strange customs.  She also explored how some of Robin's Merry Men have been portrayed in modern movie and televisions adaptations by people of colour.

I thought the most interesting example Kris brought out here was the film Robin and The Seven Hoods with Frank Sinatra where Sammy Davis played Will Scarlet.  In this film the rather randy Maid Marion (played by Ava Gardener) seduced all of Robin's Merry Men except for Will Scarlet because he was being played by a black actor.  This was a brilliant presentation and I believe Kris is publishing related articles in an upcoming publication of The Tales After Tolkien Society.

There were other interesting papers in this roundtable - next to Kris's the standout for me was John Marino of Maryville University called 'The Zombie Apocalypse in the Classroom' which related how John had used a simulated zombie attack to teach his students about survival and what is was like to live in the 14th century during the plague - very cool!

The concluding day of the 2015 Congress had two very strong Tolkien sessions.

On Sunday at 8:30am I was very pleased to see a full-room for the session 'Tolkien as Linguist and Medievalist'.  The panel for this session was made up of myself, Eileen Marie Moore, John D. Rateliff and Kris Swank. 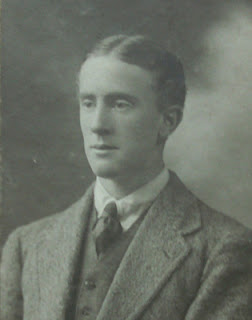 My paper 'The First Red Book: An Exploration of Tolkien's Exeter College Essay Book' explored some of the earliest academic essays Tolkien wrote in his red covered Exeter College Essay book (the first Red Book).  My analysis of these essays, which were all written around 1913-1915, suggested links to the creative and intertwined myth-making and language invention Tolkien was developing at the time and suggests that these essays, just one source of Tolkien's own early academic work, gives us interesting insights into  understanding how Tolkien used elements of his own academic training in 'lit' and 'lang' in his own early mythopoeia and glossopoeia work. 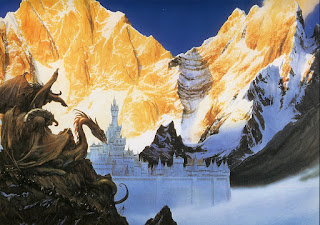 Eileen Marie-Moore gave an excellent paper on 'Inter-Elvish Miscommunication and the Fall of Gondolin' in which she explored one strand of the fate of the fall of Gondolin coming from the incursion of the speech of mortal interlopers into the 'nexus' of Elvish languages and dialects that were spoken in Gondolin.  Eileen gave some really intriguing examples of how this miscommunication was achieved through the blending of tongues, with a special focus on the Dark Elf Eol. 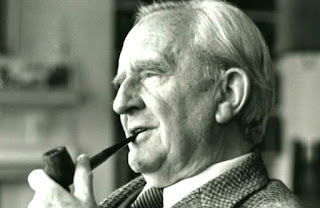 John D. Rateliff's paper 'A Scholar of the Old School: Tolkien's Editing of Medieval Manuscripts' convincingly showed that contemporary criticism of Tolkien's process of editing Medieval manuscripts, as with the current 2014 edition of Beowulf, does not take into account how editors of Tolkien's own time thought about the actual process of editing manuscripts. Tolkien and his contemporary editors had a confidence in their knowledge of the texts and felt they had the philological knowledge to be able to change the scribes (not the original writers) emendations if they did not agree with them.  As is evidenced by Tolkien's edition of Exodus and Beowulf, Tolkien would emend certain passages and not tell the reader.  John highlighted the P. J. Lucas review of Tolkien's Exodus, which indicated that Tolkien's presentation leaves much to be desired.  John also made the point that Tolkien felt that the editor of a text should be invisible 'the trail of the passing editor' and that distractions should be removed from the text so that the work was a work of poesis or art.  The key point was that Tolkien had the confidence to do this and John's paper really helped me to understand the way Tolkien presents texts like Exodus, Sir Gawain and Beowulf to the modern reader. 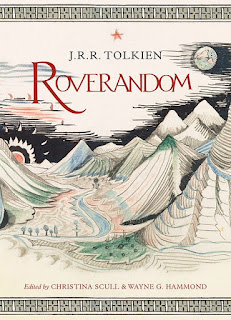 Kris Swank's 'Immram Roverandom' has to be one of my favs from the conference.  In this tour-de-force work of Tolkien scholarship Kris examined a recognisably Irish strain in Tolkien's 1925 children's story Roverandom, with a special focus on the immram, a class of Old Irish tales concerning a hero's sea journey to the Otherworld which were written in the Christian era but contains elements of Irish mythology. Kris's excellent paper identified key elements of the immram in Tolkien's Roverandom showing Tolkien's interest and use of Irish myth and legend.  Kris has an article coming out on this subject in the next volume of Tolkien Studies which I can not wait to read. 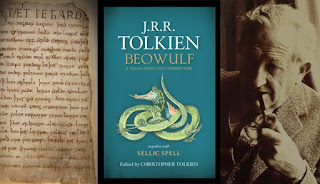 The last Tolkien session of the conference brought us back to Tolkien's work on Beowulf.

In addition to the Tolkien focused seminars and papers there were also some brilliant seminars focused on both 'lit' and 'lang'.  Of the most interesting for me was 'Words and Verses' sponsored by Society for Medieval Germanic Studies which included a paper by Dr. Nelson Goering of Oxford University (a brilliant Tolkien scholar as well) who gave a really interesting paper which looked at the metrical structure of the Word-Foot Theory of Old Germanic Meter.  Nelson is doing really brilliant work on Germanic metre and it is an area I am trying to read-up on and become more proficient in. 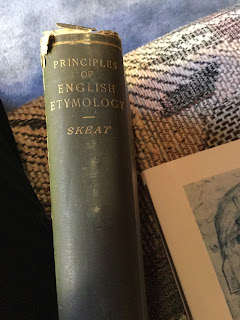 And the book rooms at Kalamazoo did not disappoint!  The list of books I purchased included two volumes that I am sure Tolkien read.  First The Principles of English Etymology by Rev. Walter W. Skeat in an Oxford Clarendon Press edition of 1887.  Secondly, Tolkien's former student G. Turville-Petre's Origins of Icelandic Literature (1953) which includes in the introduction 'J.R.R.Tolkien has also made many useful suggestions'


So another brilliant year of Tolkien exploration, discussion, debate and fun at Kalamazoo!  Based on the Tolkien at Kalamazoo Business meeting I think 2016 will be even more exciting (more to come on that!).

Now it is on to the Leeds International Medieval Congress in July where I am very excited to be giving a paper on the panel 'Celtic Literature in Tolkien's Medievalism' organised  by Dr. Dimitra Fimi - in which I will be exploring the 'lit' and 'lang' of Welsh Princesses and Cats in Tolkien's Tale of Tinuviel - having fun digging back into the Lost Tales materials!

I also recently posted an extended version of the Francis Thompson paper I gave this March at The Enchanted Edwardians Conference in Bristol to Academia.edu here.